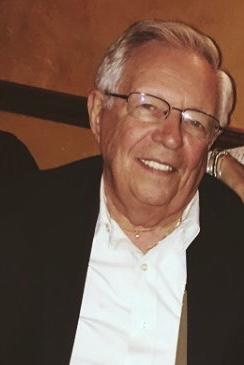 Peter David DuFault, formerly of Mahwah, New Jersey and West Chester, Pennsylvania, died peacefully and surrounded by family on July 9 at the age of 85.

Born in Trenton, New Jersey in 1936, Peter was a graduate of Rider University and followed in his father's footsteps working at Western Union. In 1962, Peter was transferred to California, where he met the love of his life, Harriet Colton.  Harriet and Peter married after six months in Oakland, California, in June 1963.

Peter and Harriet raised four children in Mahwah, giving them a wonderful childhood and foundation for life. He served the community on the township Planning Board, the Board of Adjustment, the Chamber of Commerce, the Board of Governors at Ramapo College, and as the founder of the Mahwah High School graduation gala in 1986. Peter eventually transitioned to a career in commercial real estate development and retired in 2001 after serving as Vice President for McBride Enterprises for nearly 30 years. He was an accomplished racquetball player, waking at 5:30 every morning to play with his best friend and to compete against (and beat) players half his age.

Upon retirement, Peter and Harriet moved to West Chester, Pennsylvania. After Harriet's death in 2006, Peter served on the board of the condominium association where he lived, continuing the real estate planning work that he loved. He also became an avid genealogist and was deeply proud of his French-Canadian heritage.

Peter's greatest joys in life were his family and his friends. He was a loyal, fun-loving, supportive, and adventurous friend. He was always up for traveling, happily saying "yes dear" to Harriet as they traipsed to weddings and celebrations near and far.  He was known for his love of a good joke, often sharing humorous and witty sayings with a smile and a giggle, and for being an excellent handyman who could "MacGyver" a fix for just about any problem. He loved good food and found great pleasure in enjoying his favorite meals and treats.  He was a lifelong fan of classical music and loved to attend symphony performances, especially the Philadelphia Symphony Orchestra. He enjoyed watching professional sports, especially the NY Giants; but even more so he enjoyed attending his children's and grandchildren's sporting events and activities, and could always be counted on to support them in every endeavor in life.

To order memorial trees or send flowers to the family in memory of Peter DuFault, please visit our flower store.