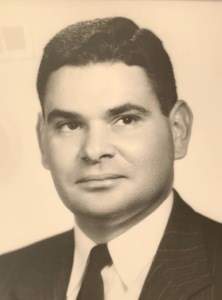 Fred passed away February 1, 2022 in Doylestown, Pa. at the age of 95. He was preceded in death by his wife Elizabeth “Betty” (nee Thompson) and sister Eleanor Thomas and survived by his partner Margaret Anderson and sister Jean Brown. Fred was born on July 4,1926 in Northeast Philadelphia where he grew up and remained a resident most of his life. In 1944, he became an Army private in World War II serving two years in the European Theater of Operations. This sparked an interest in other cultures' history, art and literature that would last his whole life. He returned home after the war interested in becoming an educator and in 1950 he received a provisional college certificate to teach English and Social Studies. Fred's first taste of teaching came in 1950 in Nenana, Alaska. He taught there for a year before returning to study at Temple University, where he graduated in 1955 with a B.S. in education and later went on to get a Masters equivalent. In the fall of 1955, he was hired by the School District of Philadelphia to teach History and Social Studies. He spent most of his career teaching at Olney High School but also had stints teaching night school, where he would eventually meet his future wife Betty. In 1957, he taught in Scotland for a year on a Fulbright Scholarship. He loved to travel. Seeing many parts of the world with Betty and particularly enjoyed France and Italy, spending many happy summers in each. After Betty’s passing, Fred continued to enjoy traveling with Margaret, exploring large parts of North America and Europe together. His curiosity and joy of life was infectious and inspired many to follow their own dreams of travel and exploration. Fred looked forward to sharing his fondness of great food and wine with his family and friends, captivating them with his stories and good humor. As a lover of art in its many forms, he often attended concerts, favoring opera and classical music. He regularly visited museums and was a member of The Philadelphia Museum of Art and The Barnes Foundation. One of Fred's greatest joys in life was reading great literature. He ended most evenings reading from his large collection of books before going to bed. He found great solace in this in his last weeks. He will be greatly missed.

To order memorial trees or send flowers to the family in memory of Frederic A. Josephson, please visit our flower store.